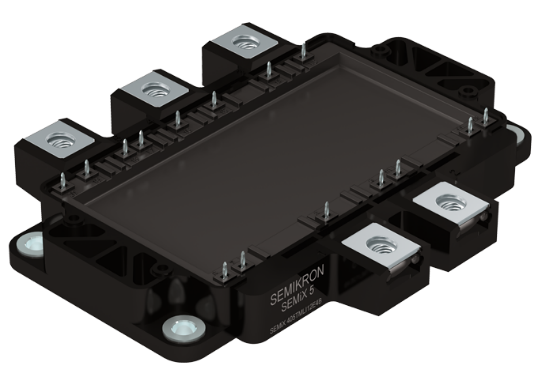 Prior to the evolution of the IGBT, power electronics engineers had two kinds of devices for fast and higher frequency switching – the Bipolar Junction Transistor (BJT) and the Metal Oxide Field Effect Transistor (MOSFET). Both could switch at higher frequencies than Thyristors (or SCRs). However, either had some limits. MOSFETS provided high switching speeds, yet high voltage and high current plans were comparatively steep, while BJTs were available in high voltage and high current designs, however offered lower exchanging speeds to some extent. Insulated Gate Bipolar Transistors (IGBTs) are switching devices with three terminals, which could successfully be deliberated to consist of an insulated gate N-channel MOSFET associated with a PNP Bipolar Junction Transistor. The IGBT unites the high voltage and current capacity of the BJT with the voltage control attributes of a MOSFET which allow higher frequency switching. The IGBT has three connections, Emitter, Gate and Collector. The conduction path is through the Collector and Emitter. Identical to a Thyristor, the IGBT allows controlled current to go through when a signal is recognized at the Gate. A thyristor is “current” and switches “ON” when a pulse is given to the Gate. The IGBT is controlled by voltage, allowing conduction when a positive voltage is there on the Gate, and only switching “OFF” when the voltage is reduced to zero, or ideally, driven negative. The output current and voltage attributes are same to the BJT, but driving the device using the voltage control of the MOSFET facilitates the switching. Another significant convenience over normal MOSFET operation is lower on-state voltage. The resistance provided by the conducting channel in an IGBT is too much smaller, leading to much higher current ratings than for an similar power MOSFET. IGBTs are the best choice for switching current on and off in high power applications. IGBTs are made for use in power applications above 1kW, the point at which BJTs and standard MOSFETs reach their limits, switching at frequencies between 1kHz and 20 kHz. Low voltage applications (<600V) tend to be high volume consumer oriented, for example to control motor drives for washing machines. Key applications include automotive (electric vehicles), rail traction equipment and industrial motor drives, where operating voltages are higher – 1200V or 1700V are typical of the standard ranges available. In numerous applications, rather than using more than one discrete devices, IGBTs are associated into modules, to provide full circuits for particular power control.